City have been known as the most populous place people choose to make a living, work and settle down. The problem is in this modern era, when urbanization and migration are uncontrollable, many big cities force to provide adequate amount of energy resources in order to serve a bigger scene of generation. Today’s cities are responsible for almost 80% of the world’s energy consumption and 75% of its carbon emissions.


The number of people living in urban areas is set to double to 6.5 billion by 2050. Rapid urbanization presents us with massive sustainability challenges that can be best met by adopting a radical new approach towards developing the cities of the future. A sustainable city is what we expect for our future and this isn’t a trivial matter at all, derive from an awareness of the decreasing energy resource, In 2008, Masdar City broke ground and embarked on a daring journey to develop the world’s most sustainable eco-city. Masdar City is a planned city project run by subsidiary of Mubadala Development Company, with the majority of seed capital provided by the Government of Abu Dhabi. Through smart investments, Masdar City is successfully pioneering a “greenprint” for how cities can accommodate rapid urbanisation and dramatically reduce energy, water and waste.

A Radical Approach
Initiated in 2006, the city was envisioned to cover 6 square kilometers and It would take approximately eight years to build, with the first phase scheduled to be completed and habitable in 2009. Construction began on Masdar City in 2008 and the first six buildings of the city were completed and occupied in October 2010. However, due to the impact of the global financial crisis, final completion was pushed back to between 2020 and 2025.
As designed, the city would be home to 45,000 to 50,000 people and 1,500 businesses, primarily commercial and manufacturing facilities specialising in environmentally friendly products. In turn, more than 60,000 workers are expected to commute to the city daily. As of 2016, fewer than 2,000 people are employed in Masdar, and only the 300 students of the Masdar Institute live on site.

The Masterplan and Architecture of The City
As you walk through Masdar City, you will notice that it looks both extremely modern and traditional. That’s because the City incorporates many passive design features which don't require energy to deliver benefits. These features have been used by urban dwellers in the region for millennia.


Masdar City was designed by Foster and Partners. Foster's design team started its work by touring ancient cities such as Cairo and Muscat to see how they kept cool. Foster found that these cities coped with hot desert temperatures through shorter, narrower streets The buildings at the end of these streets create just enough wind turbulence to push air upwards, creating a flushing effect that cools the street. Masdar City has terracotta walls decorated with arabesque patterns. From a distance, the city looks like a cube. The temperature difference is due to Masdar's unique construction. The site is raised above the surrounding land to create a slight cooling effect. Buildings are clustered close together to create streets and walkways shielded from the sun.

Each building in Masdar City is constructed with low-carbon cement, utilizes aluminum that is 90% drawn from recycled sources, and is designed to reduce energy and water consumption by at least 40%. These specifications are set in accordance with LEED (Leadership in Energy and Environmental Design) and Estidama Pearl Building Rating System baselines. Estidama – named after the Arabic word for sustainability – is administered by the Abu Dhabi Urban Planning Council.

The Buildings That Fully Funcitonal and also Attract The Visitors

1. The Masdar Institute Laboratory
The Masdar Institute Laboratory buildings are characterised by air-filled Ethylenetetrafluoroethylene (ETFE) cushions that limitthe heat re-radiated to the street. A reflective foil-cladinner layer behind the cushions sends light to the pedestrian street below. Behind the foil is a highly insulating and highly sealed panel. Design also by Foster and Partners Architect.


2. Masdar Wind Tower
Rising 45 metres above the plaza in which it stands, the Masdar Wind Tower is a modern interpretation of one of the region’s most iconic traditional architectural features. Its height allows it to capture upper-level winds and direct them to the open-air public square at its base. Sensors at the top of the steel structure operate louvres to open in the direction of prevailing winds and to close in other directions to divert wind down the tower.

3. The Siemens Building
The Siemens Building is a LEED Platinum-certified, high-performance office building, whose unmistakable exterior façade has been designed like a ‘box within a box’. The inner ‘box’ is the highly insulated, airtight wall that provides maximum insulation. Surrounding this is the ‘outer’ box comprised of a lightweight aluminium external shading system featuring fins of varying forms. 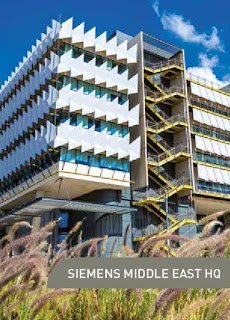 4. The incubator Building
The distinctive, ultra-modern façade of the Incubator Building slopes outward as it rises in an effect that reduces solar gain by up to 63%. The use of ‘fritting’ on the glass walls also keeps heat at bay yet still promotes diffused natura lighting inside. These circular dots of ceramic frit are applied more densely on windows higher up the building, where there is more direct sunlight, and less densely further down. Some exterior windows can be manually opened to provide natural ventilation of fresh air in cooler weather to significantly reduce cooling requirements. The design of walkways into the building’s open-air interior courtyard helps to ‘lock in’ the cooler shaded air. 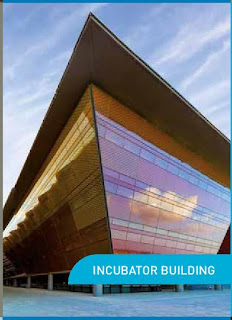 There are many more great sustainable architecture to experience at this city. Just make sure you get your right transportation. Which bring us to the next review of public visits below!

Open for Public
Masdar City is also open to the public to come and explore. There is no admission charge, simply leave your vehicle in the car park. Getting into and around Masdar City is simple, due to a variety of low carbon public transportation options, including the Personal Rapid Transit (PRT), electric and public buses and the upcoming Metro Line, Light Rail Transit (LRT), Group Rapid Transit (GRT). Once inside, Masdar City is completely pedestrianised and will boast excellent cycle routes to encourage a healthier lifestyle in a safe and convenient environment. 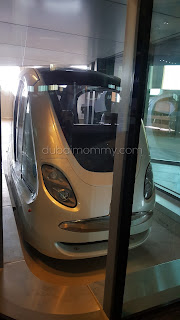 
The on-demand Personal Rapid Transit (PRT) system of electric-powered, automated, single-cabin vehicles offers the privacy, comfort and non-stop travel of a taxi service. Operated using a touch screen to indicate your preferred destination, the vehicles run along PRT-only corridors located under the street level of the Masdar Institute campus. The passenger cars run on a 1,700-metre track that passes from the parking garage PRT station to the Masdar Institute PRT station. The cars are controlled by computer and use
sensors to ensure nothing is in their path.

Solar Technology Energy
Masdar City is a growing clean-technology hub that is pushing the boundaries of urban design and renewable energy. The City features a 10MW solar photovoltaic farm with 87,777 polycrystalline and thin-film modules that occupy a 22-hectare site. At its commissioning in 2009, the plant was the largest grid-connected solar facility in the Middle East. Within the UAE, Masdar Clean Energy projects include: The 100-megawatt Shams 1 solar power project with Total that stretches over more than 2.5 square kilometers in western Abu Dhabi, Masdar City’s 10-megawatt solar photovoltaic plant in Abu Dhabi, Masdar City’s 1-megawatt solar rooftop installations, and carbon capture and sequestration projects that seek to add value to the national economy while also reducing industrial carbon emissions. 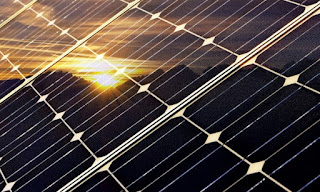 The World Most Sustainable Eco-City
This massive project is progressing to approach a completion as years go by, it’s a must to pay a visit to this city locate in Abu Dhabi, United Arab Emirates. Either to travel and to keep updating about current advanced sustainable technology that after all isn’t a rocket science to learn and understand. Let’s believe that this project will be a prototype for sustainable approach for other cities and other countries in the next future!